I make my own mincemeat every year and classic mince pies but was getting a bit bored with these. I had some filo pastry left over after making cranberry and brie parcels so decided to make a batch of frangipane and top the mincemeat with this. The result… mouthwateringly good frangipane and mincemeat pies, and bad because I could not stop eating them! You will need a mini muffin pan. Makes 24.

For the filo mincemeat pies:

For the filo mincemeat pies: 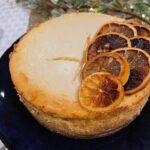